Reader Note:  Do not adjust your monitor!  (Sounds like the “Outer Limits” dude, huh?)  Yes, our logo is smaller for better appearance as in more screen space for content.  Like/Dislike is now at end of post.

We are, dear Reader, on the cusp today.

You see, as of Friday, our Peoplenomics Aggregate Index met our long-forecast target for last week’s trading being a major Wave 2 rally.  As usual, please pay close attention to the boxed area here: 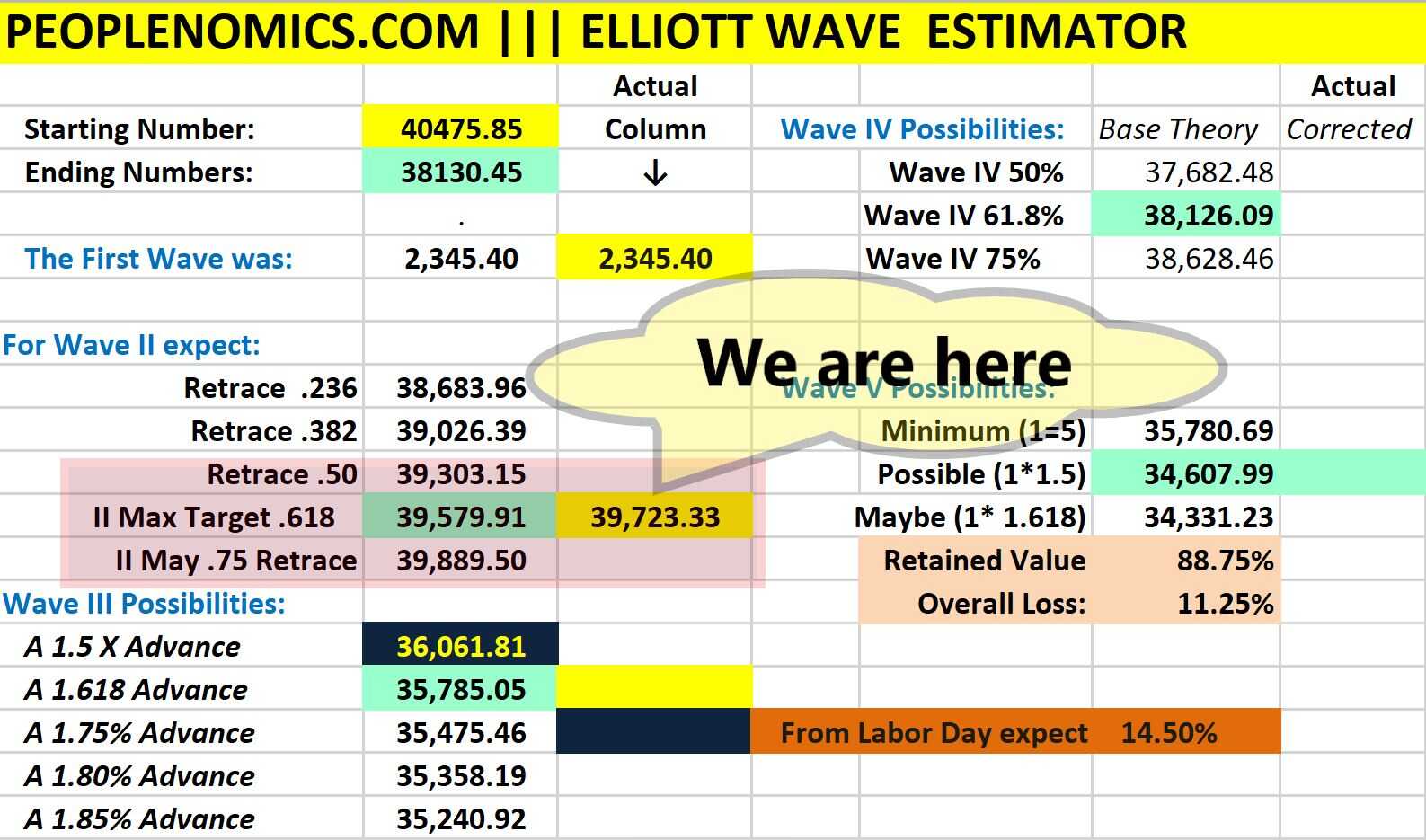 You Want Time or Price?

The whole point of doing the MBA, writing a number of books, and tinkering with a time machine and how people already are “spilling the future” has little to do with making a shit-load of money.  (Well, there is THAT…)

No…it’s really about being able to live an others-directed, well-grounded life, with some modest comforts, and in good health.  People often, understand, confuse “ego-driven” desired outcomes with “what’s really success?”

The truth – which people avoid like the plague because there are right-behavioral implicates – is that in America, anyone with a $75,000 annual income can be fat.  I mean real “porker-obese-morbidly” crap.

The further into six-figures the checking account goes, the more I’ve had to come to terms with the “reasonable limits of Success.”  We can afford an absurd excess of calories.  Yet, is it good for us?

Frankly, with my (aging) metabolism, even doing all the “making” “writing” and “inventing” that goes on around here, it’s hard to understand the “cash accumulators.”  Like the Elon Musk is worth $230-billion story this weekend.

Yet, he’s got the exact-same calorie management problem I do.  There are functional limits to wealth.  When we read Elon Musk hopes he has enough wealth ‘to extend life to Mars’, but not everyone’s amused?  Well, we’re not amused either.

There was a book written a good while back – want to say 20-years – and it looked at the problem of lift (as in “into space”) and it suggested that because of limitations of resources, the WHOLE FREAKING WORLD will only have one major chance at getting to a new planet.  Mars or whatever.  Because there’s not enough energy leftover from feeding 7.6 billion people and still have enough left over to have a new positive ROI from colonization of Planet 2.

Yes!  If we engineer a dimensional portal breakthrough, or we bend space-time manifolds?  Yeah, then things change.  But in the right now – this Monday morning world – ain’t no such proof of concept.  Like the Lockheed Cold Fusion project.  Show me the net positive energy flow.  Show me the Space Elevator working…then I can get interested.

For now, I’m planning a 900 calorie breakfast, a supply run, and funding it all with made-up money which is a similar problem into and of itself.  We have been loading “debt into money” since the banker coup of 1913…and don’t get me wrong, it’s been a useful ride.  But the dollar is down to 3 1/2-cent of purchasing power on 100 back then.  Again, there’s walls at Infinity and we’re really just a planet of apes if we haven’t gotten real about it.

We do cast our eye today on charts suggesting Labor Day was the high. And the low since (on an aggregated markets basis) was October 4th.  Which means the Wave 1 down was about 20-trading days.  Wave II – the rally which we’re thinking either ended Friday (or should this week) would be in the area of 8-trading days.

Which gives us an interesting notion (at least, if you study W.D. Gann’s work) because experientially, the slow wave seems to be the dominant market direction.  The fast waves seem to be the counter-trend moves.

Just to keep it real, then, 20-days of downside from here would put us to Friday, November 12th (on trading-days).  Which would then set up a barnburner rally going into options the following week.  You know how these financial engineer types are about paying off to the cowardly portfolio managers who can see through made-up supply chain shortages and such.

Axiomatically is in technical analysis, pick time or price points.  But you’ll almost never get ’em both.

Back to the Futures

Early stock futures were down about a hunsky on the Dow and a 12-pack on the S&P.  But remember, IF (and that’s a big IF) we are at the onset of Craplamity (which the OED somehow fails to include as a legit word!) then it will take time to evolve into “in your face” mode.

See, wave of insanity roll like that:  Even if we were to commence Wave III down, it would have it’s own wave structure.  Likely a 5-wave downer.

Which means we can possibly think in terms of 15-20 trading days (time is soft. remember) for 5 Waves; three of which should be down (longer, and the trend) while we should have 2 good rallies before November options week – which MIGHT be the Wave IV rally…and no telling how long that would last…and then finish out the year – possibly – with another “slaughter of the elves” like we had back in…what…2018 or 2019?  (Bean me up!)

INDUSTRIAL PRODUCTION from the Fed at 8:15 AM Central today.

Let’s see if it moves markets.

Going to be hard for the Obama and Biden hollowed U.S. dot-mils to talk their way around this one:  Beijing mocks America saying their new 21,000mph nuclear-capable missile is ‘a new blow to the US’.

At the same time as Sleepy Joe’s power-trip plans discharging Service Members from the Armed Forces who don’t want to take the bio-jab.

All part and parcel of Bad Government making stupid decisions.  Because when the ultra-woke fire the data-seeking not-taken-in-by-hype people, you start seeing stories like Nearly 40% of California state workers are unvaccinated against COVID despite Newsom order.

Which, in turn, rolls into places like Ports and Railroads, too…and Quick-draw Biden shoots off his foot (and mouth) even more and again.  Seriously?

To be sure, the government CLAIMS  722,00o people have died OF Covid. But since it happened at the same time the flu disappeared, along with other causes of mortality, we have to very precisely question whether the linguistics are OF covid or WITH covid.  Language matters.

We’re looking for more “hot lingo” to swirl on this.  Because government isn’t being honest about its bioweapon ro0ts and dividing is what government does anymore.

But that’s because government needs to justify itself in order to squeeze more tax revenue out of you.  When the budget busting plans firm up, BOHICA-time will be upon us.  (Bend Over, Here It Comes Again.)

Manipulations and Monetization’s Never Cease:  Here’s a Yahoo story, re-penned from the HuffPost and monetizing a likely-liar who is still out to get Trump. Ex-Spy Behind Salacious Trump Dossier Has Damning Theory About Alleged Pee Tape.  (Yawn…uh-huh…you betcha!)  This kind of loquacious gibberish comprises strapping on the Yoke of Stupidity that holds America down and under the three terms of Obama, has nearly accomplished what Soviets, Fidel, and Maoists could not.  (Not tracking? O term 1, O term 2, and Puppet Joe’s term.)

Taiwan Blowup likely to be a surprise to all (except us).  Because around here, behavioral economics is a real-important area of study.  Like when we read how China’s economic growth weakens amid construction slowdown, we think (with Xi’s rubber stamp Party meeting in 10 days, or so)  “Say, that Xi feller needs a pivot point…Taking Taiwan as he promised is a short shot-clock now…”  Toss in their hypersonic minute-missiles and yep…ready?  Set?

Help a brother out?  Is this Art or Stupid?  (And would CNN differentiate?) Artist stages mass nude photos to highlight disappearing Dead Sea.

Crooked Social Media Tracker:  So besides encouraging anti-American and illegal immigration actions, FB won’t “hire American?”  Facebook to hire 10,000 in EU to work on metaverse.  Seriously – you read where The AG of Arizona is going after FB on border jumpers? Attorney General Brnovich: Facebook Admits to Aiding Human Smuggling. Good reporting by Arizona press but where is the National (still-) Crooked Media?  Can’t call out the fifth rail compadres holding Slow in office?  No, of course not…

Men in Tights File:  Woke children keep tearing down core values at every turn: Superman drops ‘American way’ motto.  UrbanSurvival may have to drop “Everything’s a Business Model” and roll into USA B FKT.

Oh – and New and Improved Racism has been spotted: Chicago museum fires all of it’s mostly White female, financially well-off docents for lack of diversity.  Guess what?  Reverse racism is STILL racism.

Remember a country where genuine, total, across-the-board equality had a chance of being realized?  Poof!

Write when you get rich,