A short note to begin with:  Both Grady (chief coder and guru at our www.nostracodeus.com project) and I are wondering why the words “Washington” and “flash” have started appearing around one another lately?

Here’s a note from G this morning:

This is not the first time “flash” has popped up in our data…it began to build a couple of weeks before the NK bomb test.  But we were both thinking it would be tapering down thereafter.

“State” and “break” are showing up, too.

When we get word clusters like this, I tend to try and make sentences out of them.  For example, something like “Washington state flash break” could mean something like a major power intertie off Grand Coulee getting attacked, or who knows what.

I assume you are visiting our www.nostracodeus.com site daily to work on the puzzling words that pop up out of the overnight run against major news aggregation sites?  We’ve actually started to write a book about the theory behind the project and one of these days, I will spring it on you.  The first chapters will likely be up for our www.peoplenomics.com subscribers tomorrow.

Oil and the Depression Milk Strike

Oil made a run at the $30 barrier this morning.  That is basis the West Texas Intermediate, which is US oil.  It was a few cents higher in Eurabia.

Still, this is working its way up to being a huge story because it’s hard to sell “normal” in the midst of collapse.

We know that in this part of the long wave economic cycle, we get into some real out-sized distortions of the economy.

As prices collapse in one of the key commodities, the producers of the product often take to radical political action to make their point.

While we have the current collapse of oil ongoing, it is instructive to see how the collapse of farm prices in the 1930’s depression worked out.

One major skirmish was the great Wisconsin Milk Strike of 1933:  Here’s the pertinent part of this, borrowed from Wikipedia, which I trust you contribute to because it really is the premier reference work on the ‘net:

Wisconsin’s Past and Present lists the price of evaporated milk from 1927 to 1929 as $4.79 / 100 lb with 46% to farmers, 33% to manufacturers and 21% to merchandisers. That price fell to an average of $3.48 / 100 lb, with individual farmers receiving a smaller percentage of the proceeds: 30.5% to farmers, 43% to manufacturers and 26.5% to merchandisers between 1930 to 1933. This decrease, combined with inflation during the Depression,[citation needed] put small farmers in an extremely difficult position. Farmers who produced milk for bottling were able to remain solvent, but those who produced milk for cheese, butter and other uses were driven into poverty. This created a kind of civil war between the two types of dairy farmers. Milk to be bottled was largely unaffected by the strikes.

In the 1930s, Wisconsin was the largest producer of milk in the United States.[1] According to the 1930 decennial census, there were more than 125,000 dairy farms in the state. 63% of all land in Wisconsin was farmland and 71% of that land was used for dairy farming.[2] 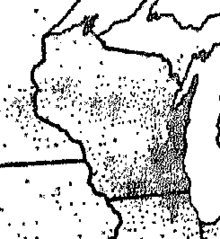 Distribution of milk sold as whole milk in Wisconsin in 1929, from 1930 Census.

Methods employed in the strikes were initially to simply not sell milk unless a previously agreed upon price had been met. When the strikers realized they were grossly outnumbered and that some of the members were selling at a reduced price, they resorted to roadblocks to prevent milk deliveries to the manufacturers. Fixed road blocks were established and trucks were turned back if they contained milk. If they refused to turn back, the strikers forcibly dumped the milk at the roadside. In the early strikes, the deliveries simply took alternate routes to avoid the fixed roadblocks. During later strikes, the strikers took to the roads in search of delivery trucks and forced them to turn back as they were found. When they couldn’t stop the deliveries, the strikers sometimes resorted to tainting the delivered milk with kerosene or oil, or in a few cases, throwing bombs at the creameries.

The state attempted to get milk to market by breaking up the road blocks or escorting convoys carrying milk to their destinations. Tear gas was employed to disburse larger groups of strikers and in one instance guardsmen with fixed bayonets forced farmers from their position. Railways and interurban trains were used to bypass the roadblocks, but some rail lines were blocked by strikers and at least one freight yard was infiltrated resulting in the dumping of the milk in the yard.

The key point I am making here is what?

If you answered “Well, gee, does this mean that we are seeing around the margins the evolution of a similar-sounding price collapse?”

Give yourself a gold star.

Now – as my consigliore’s work reminds us, the changes in Crude oil prices take about 65-months (e.g. a tad over 5-years) to completely work their way through the economy.

As it turns out, not only should Great Depression chronicler Ben Bernanke not be surprised by this, as he seems to be, n either should the Fed which seems immune to learning the lessons of the past, despite the former Fed Chairman being an expert in how the last Big One rolled over America.

As we have endlessly explained, we have seen a rhyme in the mass migrations; specifically from the farm to the cities and factories in the 1920’s and from the Here and Now off into the virtual realms of computing this major cycle.

But now, with the drops in oil, we are seeing the same kind of pricing power collapse set up around the margins that just about ensure that by the time we get to 2020, life in America will be at something like half the employment levels we have now.

Robotics, massive immigration, and seditious political leadership require no other outcome.  It’s just not apparent, yet.

Besides, oil bounced up to near $32 and the Dow futures were up 141 when I looked.  Perhaps this is all in reaction to the…

Fed Trying to Jawbone the Markets Up

Notwithstanding the larger/macro background, the Fed is pushing Fed presidents out onto the rubber chicken circuit this week.  And the markets didn’t teeter and collapse Monday.  Some highlights:

The one criticism of his discussion I have is that in quite gentlemanly and academically coded language refers to the “lower bound.”  The more useful street name for this is “End of the Freaking World.”  You just got to know Fed Speak.

Toward that end:  You need to grok this thing called the Zero Lower Bound.  In Fed Speak you will hear this referred to as the ZLB.  It’s common abbreviation among the non-papered, great unwashed (which reminds me I should shower this morning) is TEOTWAWKI.

That said, Fisher’s discussion of Fed in the Box was really quite good and this is worth the time to read:

None of these options for dealing with the difficulties of the ZLB suggest that it will be easy either to raise the equilibrium real rate or to mitigate the constraints associated with the ZLB. But when the real rate is close to zero, even small effects can make a noticeable difference. And, of course, such issues are clearly worthy of additional research.

You have no idea how reassuring that the actual onset the End of the World being labeled a “constraint” is.  Makes for a good night’s sleep, you know?

And from Fed critic and bow-tie supermodel Jim Rogers: Rogers: No Confidence At All in the Federal Reserve.  Take a number, brother Jim.

Ure’s truly has been telling you for how long that the Fed is doing the same rate hiking regimen as they went through prior to the blow-off top in the 1920’s?  Have I, or have I not, been telling you that they would be likely to raise again (and maybe twice)?

Well feast the corneas on this:  Federal Reserve to increase interest rates.

Note that we haven’t screamed this, before.  That’s because we are working on a complete replay of 1929.  Shall we see how the December rate hike ought to play out?

You will see that the Feb ‘28 replay number was the one done in December.

This means about 60-days after that, the Fed should raise again.

The January 27 decision seems too early to me, so I would circle the March meeting.  (Did I mention I got a corned beef flown in?  It’s almost that time of the year out here…and I like to get an early start on things.)  March Fed decision is on the 16th and then St. Patrick’s day, the day after.  By that time, the markets should be printing us tons of green.  A fact I will remind you of, if the market sticks to my script…

There is a reason for making this call.  In our work over on the www.peoplenomics.com site, we note that the market is doing about what the market did in the first week of July of 1928..  This means what?  Well, in the very short term, I wasn’t blowing smoke when I said on Coast2Coast recently that I expected a new high in the market by May…because that’s where we will go.

Since everything else is quickly turning to crap as investment vehicles (oil, real estate in Houston and so forth) it looks to me like we will catch our stock bubble which will put us right on track for the Big Collapse of 2017 which I’ve been nattering on endless about.

Fasten your seat belts and watch closely.  Ure is about to move money into his options account for the ride of a lifetime to the upside and then for the back to back money triplers in collapse.

May not be very sporting of me, but that certainly is how it looks from the peace and quiet of the East Texas Outback.

In Final State of the Union Address, Obama May Set Aside Convention.

“Quick, Elaine…don’t we have something else planned?  Can we make something up?”

Oh, wait, somehow I didn’t get an invite.  Imagine that.

Lotteries as a Take on Statistical Idiots

I’m not the only one saying it:  The Fascinating Math Behind Why You Won’t Win Powerball.

Still, when our math consultant sends me the numbers, I will split it 50-50 with him…He’s outside the US…but Andres, haven’t received the email yet.  Try my gure@centurylink.net account!

20 thoughts on “A Word from the Future?”